CHAMP started off as the Peel Association for Mathematics Education (PAME) in 1985 through the efforts of Alex Norrie, Bob Jones and Claire Zeller. Among the ten people who were at that first executive meeting at Gordon Graydon Memorial Secondary School were MaryLou Kestell, Carol Martin, John Rodger, Donna Del Re, Liz Henry, Marlene Dewey and Richard Dewey. However, the group had to wait until the provincial conference in 1986 to be officially recognized as a chapter.


The first co-directors of the executive were Bob Jones from the secondary panel and Helen Baker from the elementary panel. After a mini-conference in February of 1986 at Brampton Centennial Secondary School, Janet Mitchell and Jeff Irvine took over as co-directors. The chapter signed up 42 members at the conference and had a new logo. The first official event was held in May and featured a keynote presentation from Brendan Kelly on "Promoting Excellence in Mathematics K-13". By the end of the school year, the chapter had grown to 97 members.

A change in name became necessary as in the fall of 1988 Chris Dearling of Halton, Jeff Martin of Etobicoke and Walter Curran of Dufferin-Peel joined the chapter. After a contest in the spring of 1989, the chapter became officially known as the Credit Humber Association for Mathematics Promotion. Within a couple of years, this growing chapter took on the task of hosting OAME/AOEM 1991. The conference was co-chaired by Bob Jones and Jeff Martin and was held at the Regal Constellation hotel in Etobicoke.

In 2014, CHAMP again hosted the 41st OAME/AOEM Annual Conference. The co-chairs were Paul Alves and Dwight Stead. This conference was the Association's most successful ever and charted new directions in many ways, including offering the first ever e-Conference to participants. Over 1500 registrants attended the conference to view our keynote speakers: Sugata Mitra, Jo Boaler and Mawi Asgedom and our featured speakers: Ralph Benmergui, Damian Cooper, George Couros, Brent Davis, Cathy Fosnot, George Hart, Dan Meyer and Marian Small. This conference drew many new members to CHAMP making it the largest chapter of OAME!

​CHAMP has continued to grow and support the vision of OAME. Its annual fall conference continues to be a primary source of professional development for teachers in the area. The contests and awards assemblies have provided students in the region opportunities to compete and be recognized for their love of math. CHAMP looks forward to another forty years (and many more) as we reach out and look to support a progressive vision of mathematics education within our schools, our region and our province. 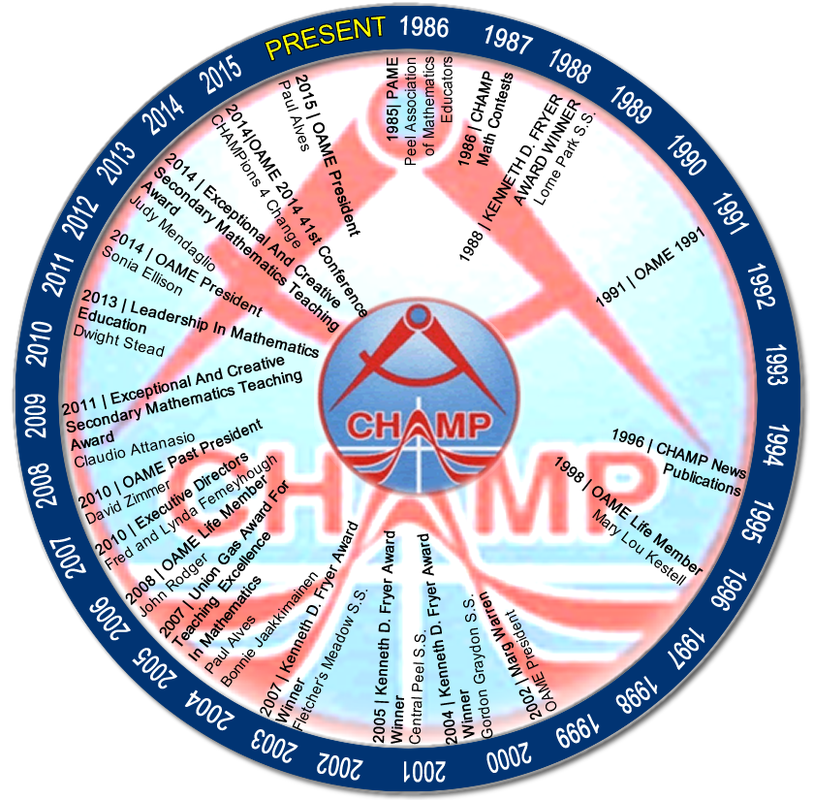